We are developing an online store in Symfony 5 and Doctrine 2 where multiple customers (called participants in this case) can participate in the same order item and share the cost. The following simplified class diagram demonstrates the domain model: 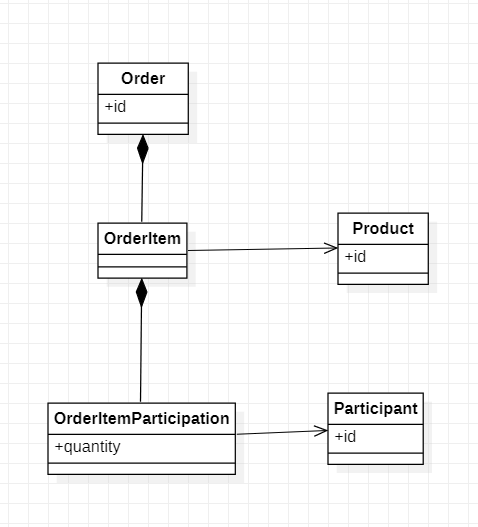 The pure object model works fine in unit tests, but you obviously need to persist the data to a database, which is why we need to introduce IDs.

Order,Product andParticipant are entities with their own ID. In an ideal world,OrderItem andOrderItemParticipation would not need their own ID but be identified by the related entities they belong to, meaning their ID would be a composite foreign key.

So, anOrderItem would by identified by the composite key ofOrder.id andProduct.id, which is pretty much exactly the same as given in this example from the Doctrine 2 documentation: https://www.doctrine-project.org/projects/doctrine-orm/en/2.10/tutorials/composite-primary-keys.html#use-case-3-join-table-with-metadata.

SinceOrderItemParticipation relates toOrderItem, which uses a composite key itself, it would need to use a nested composite key consisting ofOrder.id,Product.id andParticipant.id.

Unfortunately, Doctrine 2 doesn't seem to be able to work with nested composite keys as ID. I get this error

when I try to generate a migration with the following mapping:

So it seems that Doctrine is fine with my ID mapping inOrderItem, but it struggles when it gets toOrderItemParticipation. Is there a way to make Doctrine work with the given domain model? Is it maybe just an issue with the auto-generation of the migration, so if I had already manually set up the database, Doctrine might work with the given mapping? Or is the nested composite key ID approach too complicated for Doctrine?

Our community is visited by hundreds of web development professionals every day. Ask your question and get a quick answer for free.

Find the answer in similar questions on our website.

104 php - My password didn't pass valid authentication in codeigniter
618 javascript - How to display PHP CodeIgniter error validation if the form has error and display successfully submitted if it has no error
834 php - Why VideoStream class not open a external video URL?
437 php - Laravel HasManyThrough nor BelongsToMany doesn't work in my case. Is it database structure problem?
707 php - Initialization of div class with predetermined filter - need syntax assistance
854 php - How can i fix this col ? i did not arange my items i tried everthing but i did not fix the problem
393 wordpress - Error in class-wp-roles.php - "array_keys() expects parameter 1 to be array"
412 php - Indirect modification of overloaded property has no effect when I try to unset() from a multidimensional array
456 php - passing a string variable in a javascript function
563 php - How can I set a specific PhpSession Cookie for a webpage?

Do you know the answer to this question? Write a quick response to it. With your help, we will make our community stronger.

About the technologies asked in this question

PHP (from the English Hypertext Preprocessor - hypertext preprocessor) is a scripting programming language for developing web applications. Supported by most hosting providers, it is one of the most popular tools for creating dynamic websites. The PHP scripting language has gained wide popularity due to its processing speed, simplicity, cross-platform, functionality and distribution of source codes under its own license.
https://www.php.net/

Symfony compares favorably with other PHP frameworks in terms of reliability and maturity. This framework appeared a long time ago, in 2005, that is, it has existed much longer than most of the other tools we are considering. It is popular for its web standards compliance and PHP design patterns.
https://symfony.com/

HTML (English "hyper text markup language" - hypertext markup language) is a special markup language that is used to create sites on the Internet. Browsers understand html perfectly and can interpret it in an understandable way. In general, any page on the site is html-code, which the browser translates into a user-friendly form. By the way, the code of any page is available to everyone.
https://www.w3.org/html/

Welcome to the Q&A site for web developers. Here you can ask a question about the problem you are facing and get answers from other experts. We have created a user-friendly interface so that you can quickly and free of charge ask a question about a web programming problem. We also invite other experts to join our community and help other members who ask questions. In addition, you can use our search for questions with a solution.

Get answers to specific questions

Ask about the real problem you are facing. Describe in detail what you are doing and what you want to achieve.

Help Others Solve Their Issues

Our goal is to create a strong community in which everyone will support each other. If you find a question and know the answer to it, help others with your knowledge.